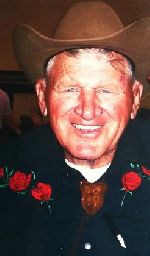 Rolland “Rollie” Matthew Miller, age 81, of Glencoe, MN, was promoted to glory on March 27, 2014, at Park View Care Center. His spirit never waivered even tho

Rollie was born on August 31, 1932 in Orono, MN, to Carl and Ruth (Lotsberg) Miller. He was the third of seven children. He graduated from Mound High School in 1950 and soon after enlisted in the Air Force where he served four years at F.E. Warren Air Force Base in Cheyenne, WY.

He married Twila Peterson on March 22, 1954, and their marriage was blessed with six children in six years! Rollie and Twila started quite a legacy with 17 grandchildren – Dan, Mandy, Leanne, Rachel, Becky, David, Ross, Roxanne, Rosie, John, Matthew, Caity, Karly and Billy. And those grandchildren have added 23 (plus one on the way!) great-grandchildren, all of whom loved their “Papa” very much.

Rollie tried his hand at many occupations, from selling insurance to doing all kinds of carpentry work. He finally retired after more than 20 years of working as an irrigation ditch rider in Fort Collins, CO. But his calling was to be a Christian minister. He touched so many, many lives through the ministry. He married many couples, including some of his own children and grandchildren. His faith in God spoke volumes to all who had the pleasure of knowing him. Through faith, testimony and outreach to “the least of these,” God used him as His instrument and many people were brought to faith in God by their work together.

Rollie is preceded in death by his beautiful bride of 60 years, Twila Miller, and their son John. He is also preceded by his mother and father; his brothers Myron, Roger and Karl; his daughter-in-law Virginia and his son-in-law Doug.

Funeral services took place on Tuesday, April 1 at Buffalo Covenant Church. Arrangements were made by Peterson Chapel of Buffalo.