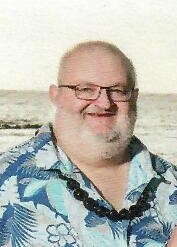 He was born on June 1, 1964 in Winnebago, Minnesota to Dallas Gene and Ethel Mae (Olson) Hansen. Mike grew up in Wells, Minnesota and graduated from high school there. To further his education, he attended Austin AVTI and moved to the Twin Cities to start his career.

In 1986, he met Kristin Schmidt while working at Seagate in Minnetonka where they would play Wildcard Poker on the coffee vending machine cups and read horoscopes (during breaks of course). The two were joined in marriage in Bloomington, Minnesota on July 30, 1988. Together they raised two children.

Michael was employed with Herc-U-Lift in Maple Plain. Besides working, Mike enjoyed camping, deer hunting, fishing (especially ice fishing with the guys at Lake of the Woods), his dogs (his kids’ dogs), and spending time on the lake, tooling around in the pontoon boat.

He is preceded in death by his parents; and brother, Terry. Michael is survived by his wife, Kristin; children, Mandi and Dylan (Hope); sisters, Pam (Randy) Giebel, Carole (Paul) Brill, and Sheila Hansen; numerous nieces, nephews, and other relatives and friends.

A Memorial Gathering will be held on Saturday, December 7, 2019 from 1:00 – 3:00 PM at The Peterson Chapel in St. Michael, MN. Online condolences for the family may be directed to www.thepetersonchapel.com. In lieu of flowers, memorials may be directed to the Wounded Warrior Project, Michael’s favorite cause.