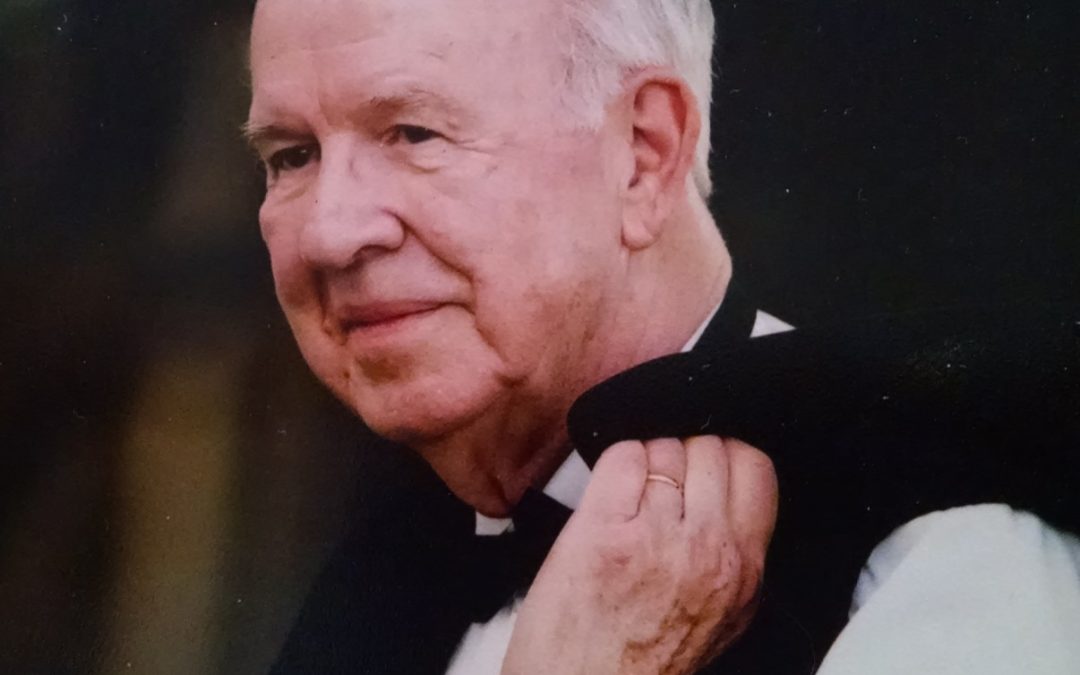 Mark W. Lee, Sr. went home to Jesus on October 14, 2021, at 98 years of age. Mark was born to Lura and Mark Lee on January 23, 1923, in Akron, Ohio. He was active in school activities and did well academically. He accepted Christ as his Lord and Savior as a senior in high school and it changed the direction of his life.

Mark met his wife, Fern, while students at Nyack College (NY) in 1942. They married in September 1943 and went on to have four children, Sharon, Mark Jr., David, and Jody. Mark was ordained in the Christian & Missionary Alliance denomination following completion of his bible college degree. After a year serving as an associate pastor in Nebraska, they moved to Chicago where Mark completed both B.A. and M.A. degrees at Wheaton College (1944-48). He also taught as an instructor during the last two years at Wheaton.

Mark was invited by Billy Graham, then president of Northwestern Bible School (currently University of Northwestern in St. Paul MN), to teach speech and theatre which he did from 1948-57. Mark started work on a PhD degree in speech & communication at the U of MN. In 1957, Mark was offered a post at Whitworth College (Spokane WA) and the family moved there during the summer. He chaired the Speech & Communication/Theatre Arts department and taught at Whitworth until 1970. During his last year he also served as Academic Dean. During his years at Whitworth, he spent several summers and a sabbatical year at the U of WA to complete his PhD, specializing in Rhetoric and Public Address.

In 1970, Dr. Lee was invited to take the presidency of Simpson College in San Francisco (currently Simpson University in Redding CA). He did so and served for 17 years as Simpson’s president. Upon retirement, he was asked to serve as chancellor for an additional 10 years.

Throughout the decades, Rev. Dr. Mark Lee served churches as pastor, interim pastor, or guest preacher. His longest service as lead pastor was for the Buffalo MN Covenant Church from 1952-57 while teaching at Northwestern. During subsequent years, alongside other full-time duties, he served as a speaker for Christian conferences and retreat centers around the U.S. and Canada, and as far away as South America and Asia.

Mark was also a writer. He wrote more than 10 books, including So You Want to Speak, The Minister and His Ministry, Our Children Are Our Best Friends, Leadership/Followership and Finishing Well. In recent years he developed a blog and access is available through Simpson University in CA. Mark was a loving husband and father. Throughout his life from the age of 17, he held an unwavering faith in God, which he shared with those who surrounded him. He was dedicated to sharing the gospel of Jesus Christ and helping Christians develop greater depth and maturity in their faith.

Mark joins his wife, Fern, his parents and his twin sisters in Heaven. He is survived by his children, Sharon (Gordon Davis), Jody (David McElrath), Mark Jr. (Helen), and David (Susan), as well as his grandchildren Mark III, Nathan, Benjamin, Kyrsten, Amy, Jordan, Stephen, Frosty, Dyer, Curtis, Joy, Andrew, and Heidi. He is also survived by 23 great grandchildren and one great, great grandchild.

From his children: “Praise the Lord! Dad is at home with Jesus and our Mom.”

The family requests that anyone wishing to make a memorial gift do so toward the Mark Lee Family Scholarship Fund at Simpson University, 2211 College View Drive, Redding CA 96003, Attention: Ray Van Gilst