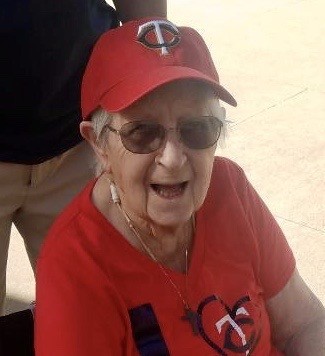 Gladys Erma Polzel of Klamath Falls, OR, passed away peacefully on May 6, 2020 in Albertville, MN, with her loving daughter Jolene and dear niece Paula by her side.

Gladys was born on September 10, 1928 in Little Falls, New York to Charles and Iva (Smith) Mitchell. After graduating high school, she worked in administration for a lawyer’s office, assisting the firm with various tasks.

Her first marriage brought her three wonderful children, and took her around the world, as far as the Philippines, before landing in Southern California. While raising her three young children she worked as a supervisor at K-Mart, where she met the love of her life, Leslie Dean Polzel.

The two were joined in marriage on May 20, 1979 at Atonement Lutheran Church in Southern California. They moved and made their forever home in Klamath Falls, OR in 1993.

She was a woman of strong faith. As a member of Hope Lutheran Church, she was very active in numerous church events for over 20 years; her church family was like her second family.

Family meant everything to Gladys. As a mother, grandmother, and “second” mother to many people in her immediate family and the community, she was constantly showered with love and support from everyone. She never missed an opportunity to send a birthday card or a phone call; she was the backbone of her family, and words cannot express the love they have for her.

She will be laid to rest next to her husband at Willamette National Cemetery in Portland, OR. A memorial service will be planned for a later date and Hope Lutheran Church in Klamath Falls, OR.

Funeral arrangements have been entrusted to the Peterson Chapel of St. Michael-Albertville, and O’Hair-Wards Chapel in Klamath Falls, OR. Online condolences for the family may be directed to www.thepetersonchapel.com or www.ohairwards.com