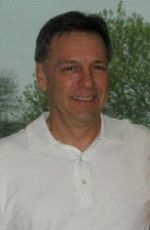 Visitation Information
AT THE CHURCH
Saturday, August 8, 2015
9:00 A.M. till time of service

David Alan Gatzke was born June 28, 1954 in St. Paul, MN. He died peacefully, after a short and courageous battle with pancreatic cancer, at his home in Buffalo on August 3, 2015 with his loving family at his side.
On July 27, 1991 Dave married Jill Bemis of Marietta, MN, at the Fort Snelling Chapel.
Dave grew up in St. Paul, graduating from Harding High School in 1972. He continued his education at the St. Paul College, graduating with a culinary degree. He worked as a chef at Ramada Inn, St. Paul and Paul’s Place in Roseville. Dave continued his career working as the purchasing agent at the Radisson Hotel in Minnetonka and the Radisson South Hotel in Bloomington. In 1989 he went to the Carlson Company headquarters in Plymouth and worked in the Strategic Sourcing Dept. as a Sr. Director until 2012. Dave then started his own consulting business, working for Best Western Hotels up until his death.
Dave enjoyed spending time with his family and friends. He loved all the wonderful summer days that were spent at home in the swimming pool and at the family cabin on Clearwater Lake, fishing and relaxing!
Preceded in death by parents Alfred Gatzke and Elsie Gatzke Slack, step-father Floyd Slack, niece Rachel Langdon, and parents-in-law Art and Jean Bemis.
Survived by his wife Jill, his children, Michelle (Doug) Strom, Zimmerman, MN, Alex and Katie Gatzke, both students at St. Cloud State University, grandchildren Joey and Ashley Strom, sister Diane (Kent) Langdon, Oshkosh, WI, step-siblings, Barb Huddle, Marie (Chris) Boon, Michael Slack, in-laws, Brad Bemis and David Jericoff, Lorrie and Greg Kuglin, Bill and Shirley Bemis, Bob and Dodie Bemis, Cyndy and Craig Johnson, and nieces, nephews, cousins and friends.
A celebration of Dave’s life will take place on Saturday, August 8, 2015 at the Buffalo Presbyterian Church, Buffalo, MN. Visitation will take place at 9am with the service following at 11:30am.