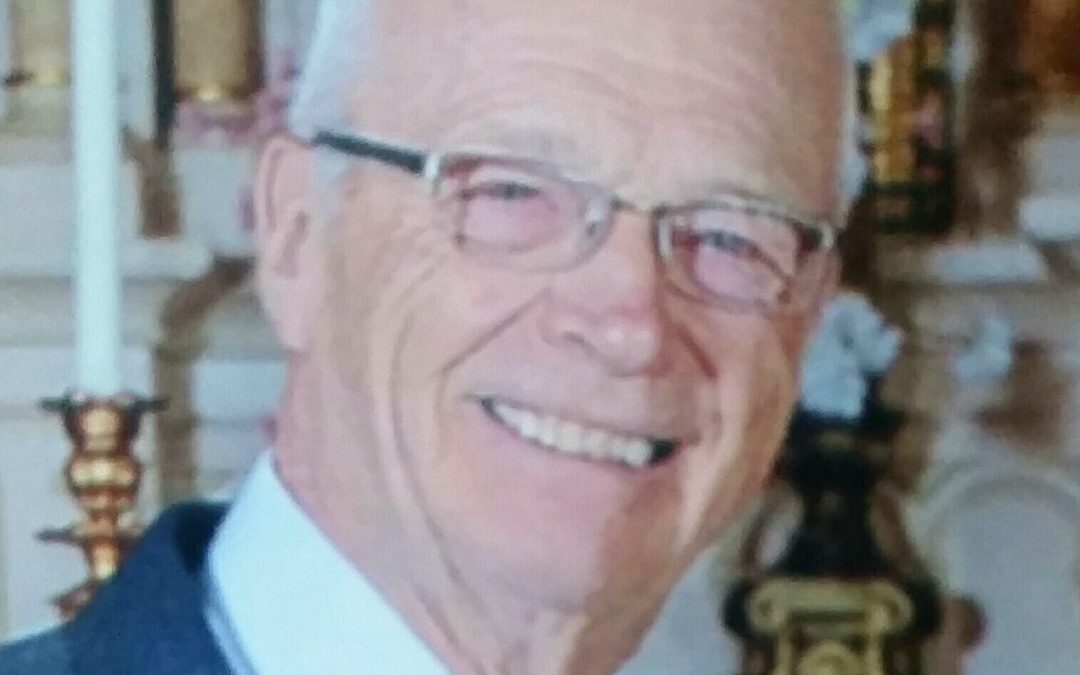 Dale Patrick Scherber, age 81 of Rogers, passed away surrounded by family on Wednesday, January 2, 2019. He was born December 23, 1937 in Minneapolis, the son of Harold and Lovina (Gutzwiller) Scherber.

Dale was a 1955 graduate from St. Michael Catholic School. On November 9, 1957, Dale married his high school sweetheart, Marlene Zahler at St. Michael Catholic Church. Together they raised five daughters and one son.  He was a proud dairy farmer until 1996, and in the early 70’s founded Hassan Sand & Gravel Inc. in Rogers. Dale was an active community member and faithful member of Mary Queen of Peace Catholic Church. He was a 4th Degree Knight of Columbus and earned Minnesota Knight of the Year. He was also active in the Rogers Lions, volunteered with the Memorial Blood Center, served on countless boards, and was involved in many other community activities. Dale enjoyed farming and operating the gravel business with his family and many valued employees, playing cards, spending time with his friends and especially his family. He never missed a grandchild’s or great-grandchild’s birthday party or event.

A special thank you to Advanced Health and Vitality, Methodist Hospital Hospice, and the private home health care aids for the great and loving care they showed to Dale and our family.

In lieu of flowers, memorials preferred to the Mary Queen of Peace Catholic Church building fund. 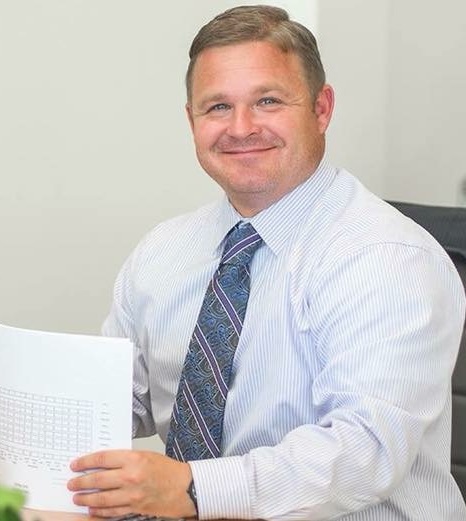 Jason Timothy Brekke,  age 42 of Albertville, MN, known to friends and comrades as “Brekke” found his place in heaven on December 31st, 2018 at 8:02 am.  Jason passed away unexpectedly in his home of a natural cause surrounded by his family. Jason attended school in Floodwood, MN and Hazen, AR.  He was stand-out athlete with passion for football and baseball.  A proud representative of the Floodwood “Polar Bears” and Hazen “Hornets.”

Jason joined the United States Marine Corps on May 5th, 1995. SSgt Jason T. Brekke above all was a Patriot who loved his country more than life itself.  As a standout Marine, SSgt Brekke spent 10 years as a Radio Operator and Drill Instructor for the 2nd Battalion, 4th Marines based in San Diego, CA. Jason traveled around the world as a Marine with his most treasured moment leaving a dog tag on Mt. Iwo Jima to honor his fallen brothers. SSgt Brekke was credited with shaping the lives and teaching survival to hundreds of young men.  For the sake of his family, Jason transferred to the US Army as a Recruiting and Retention NCO in Cloquet, MN where he continued to shape the lives of hundreds more men and women throughout the entire state.  In 2005, SFC Brekke voluntarily deployed to Baghdad, Iraq where he bravely served as part of Operation Iraqi Freedom.  1SG Brekke was a highly decorated Marine and Soldier who was inducted to the MN Recruiting Hall of Fame in 2018.  1SG Brekke retired after 20 years of devoted service to his nation.

Jason is preceded in death by father, Richard Brekke; grandmother, Hazel Juola; childhood friend, Scott Kelly; and the many fallen comrades who fought beside him on and off the battlefield.

Funeral arrangements have been entrusted to The Peterson Chapel of St. Michael-Albertville. 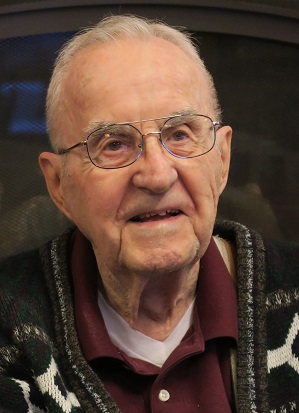 Alfred I. Betcher, age 94 of Buffalo, passed away December 30, 2018. He was born in Minneapolis, Minnesota on November 16, 1924, the son of Frederick William Betcher and Loretta Marie Mechenick.

He was baptized at St. Steven’s Catholic Church and confirmed at Holy Rosary Catholic Church in Minneapolis, Minnesota. He graduated from South High School and went to Dunwoody to become a certified electrician.

In 1942, he enlisted in the Army Air force and was a flight engineer on B-17 airplanes during World War II. He spent 7 months in Italy and put in 51 missions with his unit. He received 3 Bronze Star Medals, Good Conduct Medal, Air Medal, and 2 Oak Leaf Cluster Medals.

After proudly serving his country, Alfred was united in marriage on December 23, 1944 to Hazel Myrtle Bunnell in Amarillo, Texas in a Methodist Pastor’s home. Together they raised four sons.

He was very active as a Boy Scout Leader in his early years while his sons were growing up. Earning his Wood Badge, and helping train new leaders. He also earned the Silver Scout and Lamb Award.

In Alfred’s later years he was a member of the Lion’s Club serving in many categories; he was the Secretary to the District Governor, President, Secretary, and was Gambling Manager. He enjoyed camping and traveling, but spent much of his free time fishing as much as he could. Most importantly, he cherished making memories with his family and friends.

Memorial service will be held Friday, January 4, 2019 at 10 AM with visitation one-hour prior at Zion Lutheran Church, 1200 Hwy 25 S., Buffalo, MN. Interment at Forest Hill Cemetery in Owatonna, MN. 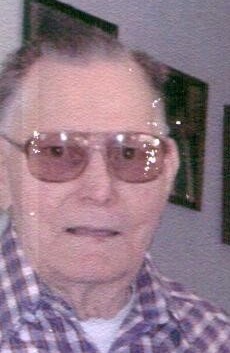 He married Lucille G. McLaughlin on September 3, 1946 at Treasure Island in San Francisco, California. Together they raised a daughter, Sandra.

He enlisted in the Navy in 1943 and proudly served for over 9 years. He was an Electrician’s Mate Second Class. After his military service, he continued to work as an electrician and was part of the International Brotherhood of Electrical Workers for over 68 years. Claude was a lifetime member of the VFW and Cooties in the Twin Cities area. Claude was an outdoorsman, and enjoyed fishing and hunting for pheasant, deer, and duck. He also enjoyed spending time outdoors snowmobiling, water skiing, and bird watching.

Claude especially loved his family and spoiling his grandchild and great-grandchildren. Spending time with his family was very special to him.

He is preceded in death by his wife, Lucille; grandson, Kenneth Bouley; parents, Ralph and Nellie; and brothers, Leroy, Raymond, and George.

A Memorial Service will be held on Thursday, January 10, 2019, at 6 PM with visitation one hour prior at The Peterson Chapel in Buffalo, MN. Interment will be held at a later date at Sylvan Cemetery.

Funeral arrangements have been entrusted to The Peterson Chapel of Buffalo. Online condolences may be directed to www.thepetersonchapel.com.
763-682-1363 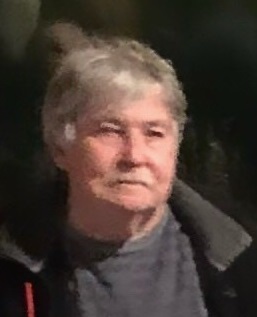 Gary Andrew Scherber was born in Buffalo, MN on May 8, 1948 to parents Lenore and Harold Scherber. He graduated Saint Michael Catholic High School in 1966 and the University of Minnesota (St. Cloud Campus) in 1971 where he graduated with a bachelor’s degree in accounting.   He had a successful career as a Certified Public Accountant, was a skilled real estate investor, and because of his extraordinary math skills, excelled at cards, even earning a television appearance.  Gary remained single and was loved by all who knew him. He was generous and caring, and an avid supporter of charities. He will be greatly missed.  He is survived by his sister, Patty, brothers Richard and Craig, along with seven nieces and nephews and several grandnieces and grandnephews.

“In lieu of flowers, donations may be made to Gary’s two favorite charities: Caring and Sharing Hands or Minnesota Adult and Teen Challenge”.

Funeral service will be held on Saturday, January 5th, 2019 at 5 PM at The Peterson Chapel, St. Michael, MN.  Visitation will take place one half hour prior to the service. 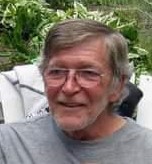 Thomas Banke, 70, of Buffalo, passed away peacefully in his sleep on December 21, 2018, after a courageous battle with esophageal cancer.

Thomas was born on August 2, 1948 in Robbinsdale, MN at North Memorial Medical Center
to Morris and Grace (Holes) Banke.  Thomas graduated from Robbinsdale High
School in 1966. After graduation he worked for Northern Burlington Railroad. He
went on to work as a quality control supervisor at Circuit Science for many
years prior to his retirement.

Thomas will be remembered most for his love for his grandchildren.  He loved
classic cars, hunting and shooting his guns by himself and with friends and
family.

Thomas had a memorable sense of humor.  He was notorious for the pranks he pulled
both at work and at home.  He found entertainment in his jokeful fibs, as
he was highly skilled in keeping a straight face while everyone around him fell
for his jokes.

Thomas was dependable and enjoyed his routines.  He could often be found sitting
in his favorite spot at the kitchen table, next to the window, where he would
greet and wave goodbye to visitors.