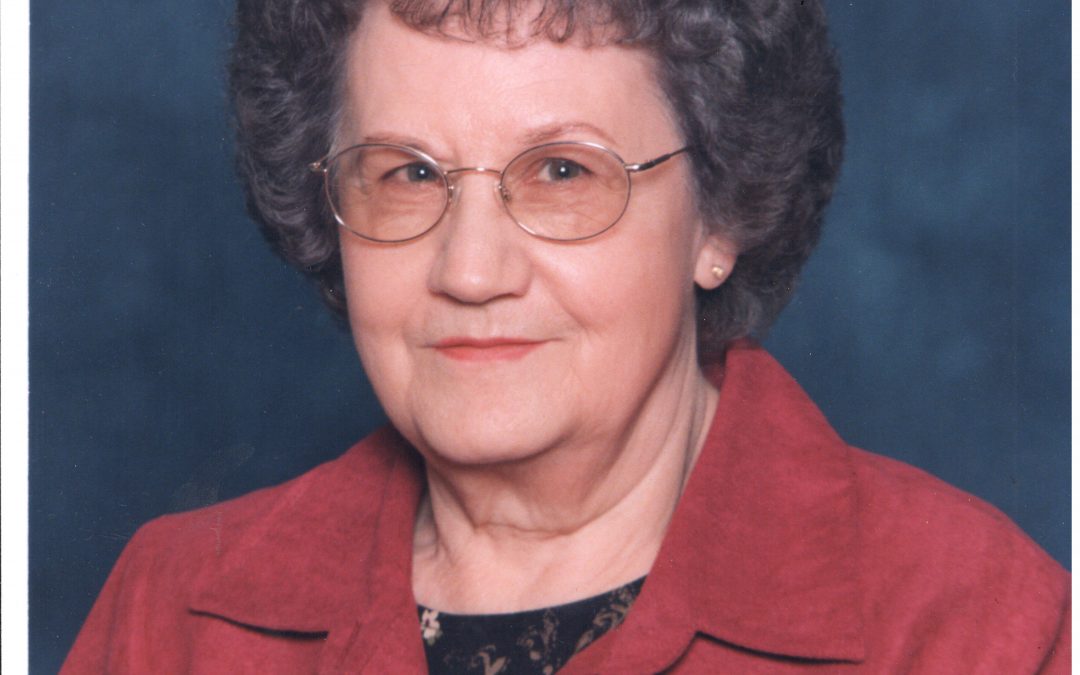 Arvella Joan Veches was born December 1, 1930 the second daughter of Herb and Hattie (Schlief) Beise.
She was baptized in the Evangelical Lutheran Faith on March 8, 1931 in Rockford, MN by the Rev. Beisrvanger and confirmed at Cross Ev. Lutheran Church in Rockford, MN on April 2, 1944 by Pastor Baer. Her memory verse was “Be thou faithful unto death and I will give thee a crown of life” Rev. 2:10
Arvella grew up on the family farm in Rockford Township, Buffalo, MN. She attended country school and then Rockford High School until her graduation.
On November 8, 1947 Arvella was united in marriage to Donald Veches. God blessed their marriage with three children Jerry, Connie and Diane.
Arvella worked part time at the Sears Catalog store in Buffalo for almost thirty years. She retired to take care of her husband Don who was afflicted with Parkinson disease.
Arvella enjoyed family gatherings and spending time with her grandchildren and great grandchildren.
She was a faithful member of St. John’s Ev. Lutheran Church in Buffalo. Arvella enjoyed gathering together with the ladies of the Mary Circle for fellowship and bible reading. She was also a past member of the Dickinson’s Woman’s Club of the Buffalo/Delano area. She was involved with her children as an adult leader with the 4-H Club.
Arvella died in the Lord on May 27, 2019 at North Memorial Hospital at the age of 88.
Arvella was preceded in death by her husband of 52 years, Don; parents, Herb and Hattie Beise; brother, Donald; brother-in-law, Preston Yonak and sister-in-law, Rita Beise.
Arvella is survived by her son, Jerry; daughters, Connie and Diane all of Buffalo; grandchildren, Kelly (Scott) Ertel Gustavson and Kyle (Theresa) Ertel both of Maple Lake; great grandchildren Macy Wurm, Allie and Carter Ertel, Josh, Kristen and Ashley Gustavson; great great granddaughter Taylor Gustavson; sister Mayella Yonak of Buffalo; brothers Dennis (Janet) Beise of Delano, Duane Beise of Loretto and Kenny (Sharon) Beise of Buffalo; sister-in-law Judy Beise of Charlotte, NC; further survived by nieces, nephews, other relatives and friends.
Funeral service for Arvella will be Thursday, May 30 at 11:00 a.m. with visitation beginning at 9:00 a.m. all at St. John’s Ev. Lutheran Church of Buffalo.
Officiating was Pastor Ryan Clark.
Casket bearers were Steve Beise, Michael Beise, Grant Beise, Doug Beise, David Beise and Troy Beise.
Luncheon to follow at church.
Interment will be in Lakeview Cemetery of Buffalo.
Serving the family…
The Peterson Chapel of Buffalo 763-682-1363